They can quickly get into your luggage and travel back home with you, causing an infestation that can be a nightmare to deal with.

Every state has their problems, those of which can affect you as you travel from state to state.

So it’s natural to wonder…

How do you know if the state you’re in has a high rate of bed bug infestations?

How do I minimize the risk of encountering bed bugs?

What states have the lowest number of infestations?

In this article we will answer these questions and run through the list of the top bed bug infested states and cities.

On that note… let’s dive in.

Unfortunately, there have been reported bed bug cases in EVERY state in America.

Not a single state is immune to infestation.

For years now, the number of cases have been growing, with thousands of reported cases in 2022.

Though the problem isn’t only affecting America.

Bed bugs are not native to America, and they have spread to every continent nonetheless.

That’s because they are avid hitchhikers.

Bed bugs tend to climb into people’s luggage or belongings, allowing them to quickly spread as people travel.

As transportation becomes more efficient, people are traveling more and more. This leads to bed bugs being spread faster than ever. 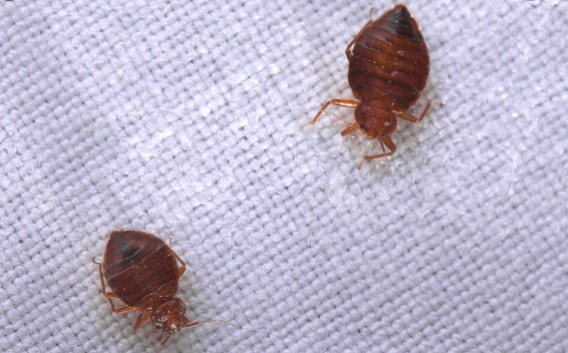 This is the reason bed bugs have made a major comeback in the 21st century.

They’re not attracted to dirt, so they can be anywhere – Whether it be run down apartments or 5-star hotels.

Is There an Outbreak of Bed Bugs?

These pests have been significantly multiplying over the past 3 decades.

In the early 20th century, bed bugs were a very common problem. But that was before we had all the pesticides that eradicated them…

Or so we thought.

There were very few cases of bed bugs in the US. The pesticides did the work, and we almost entirely forgot about the little critters.

But then they came back with a vengeance, utterly resistant to the chemicals that used to kill them, reproducing at a lightning-fast pace.

From about 2015 onwards, the number of bed bug cases have exploded.

Which State Has the Most Bed Bugs?

The popular pest control company Orkin, has recently published reports on the worst states for bed bugs, as they do every year.

Which continues to be one of the most bed bug infested states. Mostly thanks to cities like Baltimore and Washington D.C.

Indiana and Georgia originally weren’t in the top 10, but since 2019 infestations in these states have grown.

With Indianapolis and Atlanta holding the 9th and 10th spot, of bed bug infested cities respectively. .

Rounding out the top 5 we have Illinois and California. You can begin to see a trend here, whereas states with major cities are more infested.

(Due to population density)

To sum up here are the top 10 most bed bug infested states:

Here are some bed bug maps that are eye-opening.

Based on a bed bug infestation map published in 2016: 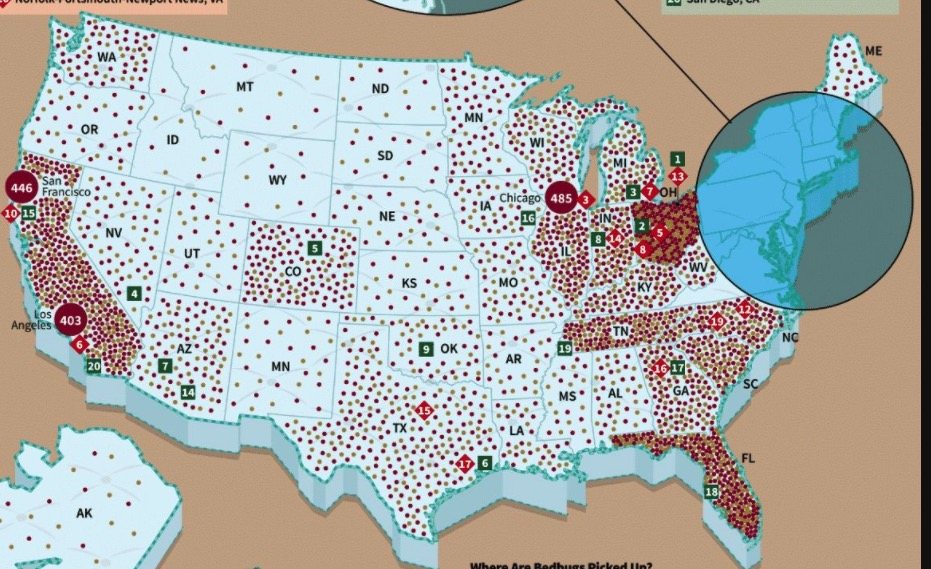 It shows that New York City had the most reported bed bug incidents at the time – a staggering 4,490 reports.

That’s a massive difference from the figures of Chicago, San Francisco, and Los Angeles, which had 485, 446, and 403 reports, respectively.

You can see that the east coast is hit by far the hardest.

This is because the east coast is much denser than the rest of the country. There are also many popular tourist, and business travel destinations in these states.

This map also has powerful statistics about where bed bugs are found.

For more recent insight, we also looked at a 2019 map of bed bug infestations. 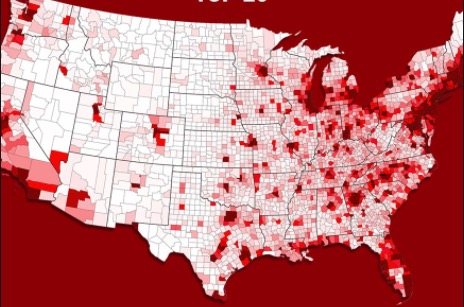 It’s almost as if you’re looking at the same map.

And as you can see from the top 10 list above, things are not so different in 2020. The share of states being hit the hardest is consistent, the only difference is that the sheer number of cases have gone up everywhere.

You can see that some of the states have traded places, but the problem still exists everywhere.

Here are the 10 cities with that have experienced significant growth in bed bug infestations.

For the first time, Toledo and Myrtle Beach made the top 50 list according to Orkin.

Though both Ohio and South Carolina have hard hit states for years.

States with the Least Amount of Bed Bugs

As mentioned, the degree to which a state is infested has a lot to do with population density. Similar to infectious disease, bed bugs spread more when there is more person to person interaction. Therefore, here are some of the states with the lowest numbers of bed bug infestations.

Though infestations in the above states is relatively less…

It’s still important to be cautious about bed bugs when traveling.

For example, If you’re staying at a hotel you should properly inspect the hotel room for bed bugs before spending the night.

Have You Experienced Bed Bugs?

If you happen to encounter bed bugs anywhere across the US, be it your apartment or hotel, we can connect you with a lawyer to discuss your options. You may be able to file a lawsuit and potentially get financial compensation.

Keep in mind that our lawyers can only represent you on a pre-litigation basis only. That means we can only assess your situation to help you determine if you have a case.

If you do, a licensed attorney will fight for you to get compensation for your losses.

(for both your injuries and expenses)

Get in touch today for a Free Consultation. There are no fees unless you win your case.