When confronted with an infestation of any kind, it can be hard to tell what kind of pest you’re dealing with.

It becomes even more challenging when you have an insect infestation because most bugs are small and different species often look similar to one another.

How can you tell the difference between a carpet beetle and a bed bug? Unlike other insects that can be easily mistaken for bed bugs, it’s fairly simple to tell the difference between these two creatures.

It all comes down to critical physical traits and behaviors that are different between the two species.

Here are a few noteworthy similarities and differences between bed bugs and carpet beetles.

Carpet beetles have speckled shells, and are lighter in color with darker spots. The larvae of carpet beetles look something like a really short caterpillar, among an elongated body coated with tiny hairs.

Bed bugs meanwhile, are reddish-brown in color and have flat bodies.

They don’t have wings so they are not capable of flying.

Bed bugs are also about ¼ inch long, which is slightly larger than an adult carpet beetle.

As the name implies, carpet beetles like to eat carpeting. In fact, larvae will eat any kind of fabric material. They’ll also sneak into food cupboards and eat anything that they can find.

Bed bugs exclusively feed on a diet of human blood. They’ll come out at night, when a person is asleep, and bite into the skin to draw blood.

By morning, this person will discover several bed bug bites left in the area of the feeding site.

3. Their Relationship with Humans

Humans are vital to a bed bug’s survival. Because they only feed on human blood, bed bugs don’t last long if they can’t find a human host to latch onto. They’ll frequently hide in beds and other niche areas of homes so that they’ll have regular access to food. 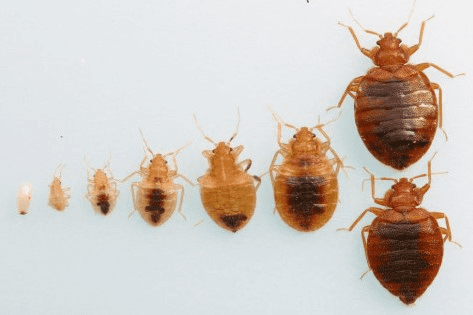 They don’t bite humans at all.

(Their jaws aren’t built for it).

However, carpet beetles have a tendency to ruin and damage furniture when in high numbers.

Can Carpet Beetles Be Mistaken for Bed Bugs?

Unlike other insects, such as ticks or fleas, carpet beetles don’t share any major behaviors with bed bugs. That makes it pretty easy to tell whether you have a carpet beetle infestation or a bed bug infestation. As mentioned before, carpet beetles don’t bite people. Because carpet beetles eat fabric and drink nectar, they lack mandibles that would allow them to break through skin.

Bed bug bites on the other hand, will appear as red-colored welts along the upper torso.

Common places people will get bed bug bites include the arms, shoulders, neck and face.

Remember: if you aren’t being bitten..

How to Get Rid of Carpet Beetles

Carpet beetles are an annoying pest, but they are fairly easy to get rid of.

Try the following methods if you notice carpet beetles in your home:

How to Get Rid of Bed Bugs

The same methods used for carpet beetles can also be used to get rid of bed bugs. Regular cleanings, using scented objects and placing diatomaceous earth are all excellent ways to deal with bed bugs without relying on chemical products.

Another effective way to deal with bed bugs is to use extreme temperatures. Bed bugs (and their eggs) can’t stand extreme heat or cold. Heat treatments are especially potent, and you can perform a DIY heat treatment with the help of your laundry dryer.

Take any clothing or bedding that’s infested by bed bugs and place it in the dryer. Set it to the highest heat setting and let it run.

When the cycle ends and you remove the laundry, you should notice that any bed bug adults or larvae will have died. These traps can be placed at the foot of your bed, and are shaped like bowls.

Once a bed bug climbs into the trap, it’ll be unable to escape.

The walls of the trap are smooth, and bed bugs aren’t adapted to climbing up smooth surfaces.

If all else fails, you can always hire a bed bug exterminator.

These creatures are notoriously difficult to get rid of, but pest control experts have access to specialized equipment that makes extermination an easy process.